First and foremost, my advice to anyone asking is that races should always be done in warm weather. Who in their right mind wants to get into 50-degree water in the throes of winter?!

That's hyperbolic. What I really meant was 57-degree water on a weekend in Palm Springs three weeks before winter. Regardless - I am now a 2-time Iron-Lady and a FIVE TIME Half-Ironlady!

This race was a hard one in the sense that I. did. not. train. AT ALL. If there was some sort of training regimen, I was not involved in it. Fortunately, my muscle memory is fantastic and I have the will of some deranged person who always longs for ice cream (true story). 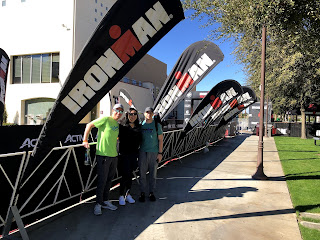 I had full intentions of taking Friday off to pack for the race, but I went into the office to finalize a few things and ended up staying well into the afternoon. When I got home, M surprised me with tickets to the LA Auto Show and I ended up eating away at my precious sleep time to get my face detected by the 2019 Subaru Forester. I blinked and it was 10pm and I still had not packed...

On Saturday morning, I left around 7am to head into Palm Springs. Race Check-In was already under way at Ironman Village and I was NOT looking forward to it. Chris and Trey met up with me right before our orientation (see picture above) and we found out then and there that all of our stuff needed to be dropped off - same day. HOW WERE WE GOING TO PACK AND RE-PACK IF WE HAD TO DROP EVERYTHING OFF?!

I dumped everything out of my car (I wish there was a picture of this).  I'm the kind of packer who packs everything in the order that I plan on wearing it. Because we had to bring our bike and run stuff to the bike and run locations, I had to pull out my swim gear, my sleep gear... essentially the parking spot next to my car was the Winnie Closet for a good 20 minutes. 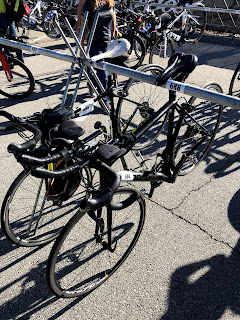 I said bye to Shadow and tied a red bandana to her aerobars so I could find her easily in the morning. We said bye to the boys and Alice and I left to finally eat (my first time all day!). Internally, I was freaking out, but it wasn't until I cracked my nail trying to put my shoe on that I realized my talons weren't going to cut it on race day. I had to get them done! 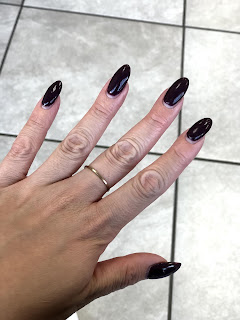 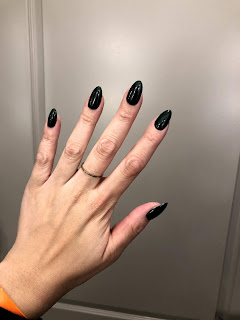 Every athlete knows it's "nothing new on race day" but every athlete also knows you should train for a race, soo.....

I didn't tell very many people this, but a few weeks ago, I had an allergic reaction to something. It was FREAK-Y. I developed hundreds of water blisters on my palms, and two weeks later the skin started to peel. It started in my fingertips and kept peeling. My palms peeled, my wrists peeled, my elbows, my toes, and my feet. It was demoralizing and uncomfortable and I was forced to wear gloves everywhere: to work, to weddings, even to SoulCycle!

Don't click this link if you don't want to cringe. This was me at urgent care, 4 days after the peeling started. It got worse before it got better.

Anyway, back to the race. I had hesitations because my skin was super sensitive after all of this happened. My iPhone won't even recognize my fingerprints anymore! My fear was that getting into the water would exacerbate the hand situation - not to mention the cold, etc. 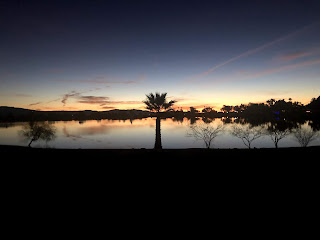 Let me just say that the sunrises in Palm Springs are beautiful. The water is peaceful, the palm trees are perfect, and if you hold your breath, everything seemingly ceases to move.

After a whole year, George and I finally got to see each other again! It was so nice to see a familiar face on race day. Since we can never sync up, here are three pictures of us - well - not syncing up! 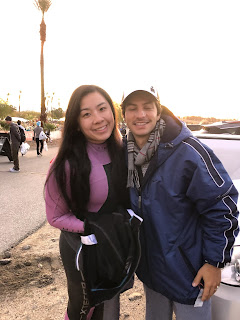 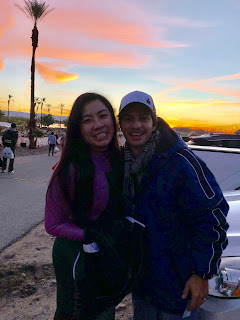 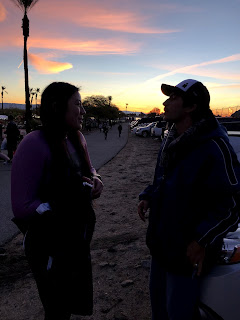 Grabbed a few pre-race pictures, and then we were off! 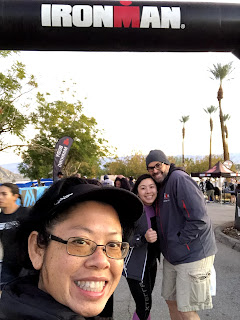 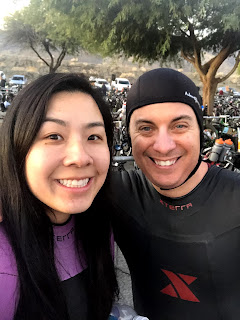 Let me just say that no one looks good in a wetsuit. No one.

We lined up at the swim start, the cannons sounded, and we dove in. I ran into the water expecting some sort of warm barrier between me and the wall of ice, but my face froze the instant the water grazed it and I couldn't feel it for 20 minutes. I could see my arms going through the motions of swimming, but had I closed my eyes, I wouldn't have known. All I could see were people passing me, and my arms just not moving as fast as I wanted them to.

Time passed so slowly. I counted from 1 to 1,000, and started all over again only to get bored. Quite possibly the longest swim of my life.

Thanks to a warm swim cap, some waterproof earplugs, and booties, I was warmer than 90% of the folks out there! 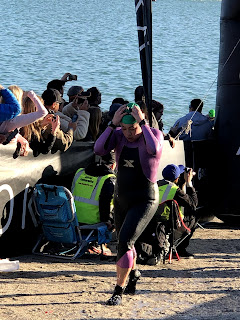 The changing tents didn't provide much comfort, but they were warmer than the air outside. I took my time and watched as others struggled in the tent. One guy would not stop shivering. My heart went out to him. I gave myself one hour total for swim and transition, so I needed to haul ass if I wanted to finish before the cut off time.

Out the chute, I went to my bike and pulled Shadow from her spot. I had it in a low gear to ensure that I made it up the slight hill getting out of transition. It was go time! 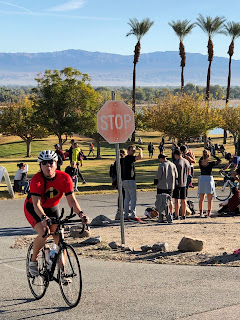 The first few miles felt great. The course was relatively flat, which meant everyone was averaging 23-24mph. It wasn't until mile 25 or so that I hit my wall. The lack of training caught up to me! The headwinds started and my average dropped down to 14-15mph. I felt beat. I wasn't hungry, I wasn't thirsty, and my back had started to hurt.

I trudged through - surprisingly enough, in a faster time than some of my other half ironmans. There were so many turns!

I was SO GLAD to be done with the bike.

I made my way to the rack, grabbed my bib and my shoes, and started the run. The "run". Oh, man. 2 years ago I developed plantar fasciitis on my left foot, which led to a bone spur, which led to a hairline fracture on my left calf, which ultimately led me to stop running because everything always hurt.

Surprisingly enough, the run wasn't too bad. When my calf started to hurt, I'd walk a little bit, but I tried to keep the running up as much as possible. Six miles passed very quickly. It wasn't until I had to start the second loop that I got a little sad. I could hear the announcer calling out the names of those who were finishing, and all I wanted to do was be done.

When I got to mile 10 on the golf course path that would never end, I could hear a man from behind me shout as the man in front of me (who was walking) screamed "oh no" and started running. As it turns out, the guy (Roger) and his brother (Gary) were doing the same race, and Roger's brother was closing in on him! Try as he might, Roger couldn't beat his brother, so he settled on running the rest of the way with me.

Very fortuitous, indeed. I always find that making a buddy always makes the time go by faster. Roger was great company. I was so happy to be finished, I had a ton of energy left! 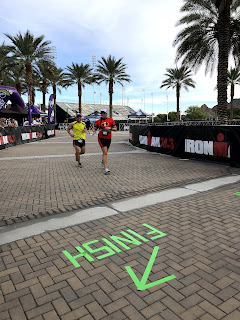 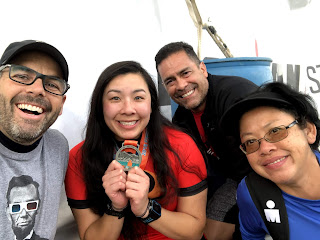 I always say this, but I am very lucky to be surrounded by some of the best people there are out there. I had a great support crew, and Jason and Mike not only volunteered, but stayed to watch me finish. Alice, as always, is the kindest person I know. She schlepped all of my bags and my beautiful Shadow back to safety and still made it in time to watch me finish! Thank you all for being the reason I race.

I got back to the hotel and slept for 13 hours. It was great.

I still can't believe I'm now a 5-time Half-Ironman and a 2-time Full Ironman.
It feels great to know that I can do things beyond my wildest imagination.
Until next time... 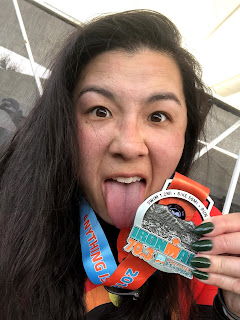