Have you ever had a weekend that was nearly perfect? That was this weekend for me. But before I can elaborate on my weekend, I first need to go over the last few weeks.

I've been sick - really sick - for the last month and a half. It started with a harmless cough. At IM Oceanside 70.3, I had cough drops in my mouth during the swim, bike, and run. I blamed the subsequent sickness I had on the half-ironman itself (I get sick after just about every race), but the cough became so persistent that I felt like my lungs were about to come out of my mouth every time I opened it. I had a nose that wouldn't stop running and ears that were plugged for a good week.

I went through three rounds of antibiotics - Each time, it felt like my cough was getting worse. My coworkers would tell me to go home or ask me if I was okay every time I started hacking. Clearly I was in no shape to work out...

So I slowed down significantly - I went from training 9+ hours a week to 2 (if I was lucky). I stayed out of the pool: my lungs couldn't handle it! and I couldn't run as much - I'd start wheezing after a mile. But the marvels of modern medicine kicked in, and this weekend, I finally started to feel more like myself! IT WAS SO NICE.

So, on to the more important things: The story of how we biked to San Diego!

Last year, when Selena/Lisa/I did our first metric century, Bree and Jared and Trey and John joined the 100-mile club riding from LA to San Diego. When the opportunity came to join them, I couldn't help but pounce on it - LA to SD! Two of my favourite cities in one trip? I'll take it! :)

We met up bright and early Saturday morning - so bright and so early that the sun wasn't even out yet. From Union Station, we biked over to the blue line and took the metro rail to Long Beach. 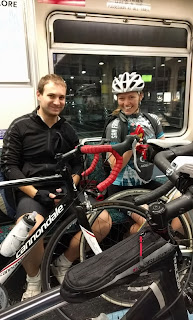 From Long Beach, we picked up Trey before we started the long journey - Through Seal Beach, Huntington Beach, Newport Beach, Laguna Beach, to Dana Point! John met us up in DP - 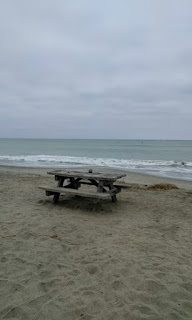 The weather was perfect. It was chilly but not cold, windy but not overbearing. We went at a relaxing pace and always managed to stay close enough to keep tabs on one another.

Dana Point turned into San Clemente, which: Lo and behold! led to a photo op in front of the Edison International Power Plant. Jared laughed at me when he realized that I stopped, but come on! Naked Gun made these things famous. 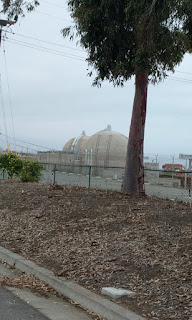 The coolest part (as usual) was biking through Camp Pendleton. I am always constantly surprised to find that there is a such a huge base essentially in our backyard. It's beautiful, secluded, and probably the only place I will ever need to apply in order to ride through.

We stopped for lunch by Oceanside/Carlsbad at a place called Angelo's Burgers - which, as it turns out, is a chain with very very good lettuce. I think we were all dying of hunger by the time we stopped, so in our delusion, the lettuce became a selling point. I'm sure we talked about it for a good five minutes. We even wrote a glowing yelp review as we ate our food:

The key word here is "delusion". 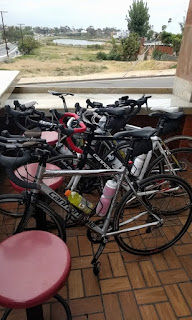 Nonetheless, it was nice to get a break after 60+ miles of riding. Full of burritos and burgers, we started up again.

And then the monster. 95 Miles in, John thought it would be funny to take us to Torrey Pines: a gigantic mountain and the only route to get us where we needed to go.

Not that bad of a climb - 1.5 miles and an elevation of about 500 feet - I thought it was going to be worse than it really was. But it was beautiful! 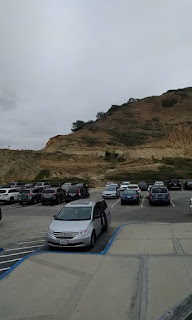 It was funny, because the ride (for the most part) was relatively flat with a few rolling hills. We were going down a hill when I saw Torrey Pines ahead of us, and I think my eyes doubled in size. We took the long and gradual path versus the steep and narrow one, though I think next time I may try my hand at the steep path. It can't be that bad, can it?

Somehow we ended up at UCSD - I don't know how people get from one point to the other - the campus is so huge I got tired as we biked through it! 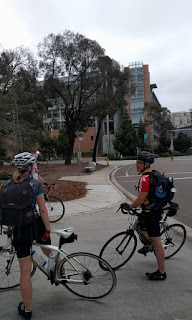 We kept riding - Mission Bay, Pacific Beach - It wasn't until we stopped at the Santa Fe Depot and Bree walked into Stone Brewery that I realized we had finished. 107.7 miles. We were 4.3 off from a full iron distance bike ride! I felt great. I didn't cramp up (though my back did start hurting around mile 90), and we had time to enjoy an IPA with John before he caught his train home. 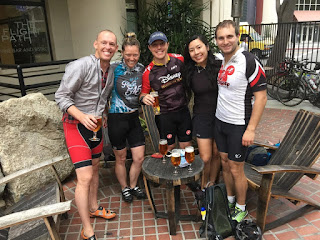 What a fun ride and a fun trip!
As I always say - it didn't happen unless Strava said it did. With that said:


And how did we celebrate? Food at The Crack Shack, but more importantly, ICE CREAM (ok, Gelato) -


Good times. We took the Amtrak back home - I ate half a 14oz bag of Skittles (Think 5 - 6 big handfuls) and was still able to sleep the rest of the way home. To many more centuries!