So... let me get a few things out of the way before I start.


Oceanside was my second 70.3. Unlike Vineman last year, I knew what I was getting myself into. I knew the amount of work that it would take to do the half, and I knew how I'd feel transitioning into each event.

Also unlike Vineman last year - I didn't train as much. The winter season was really hard for me. I kept getting sick (my immune system has always been weak), and I never wanted to go to the pool because it was always so cold! With that said, however, I did work out a lot, and I did put in a lot of effort: I did my first full century ride, I ran a half marathon the day after (!), and I even did the LA Marathon! Technically I should have been prepared. But I also didn't brick my training, and those swims! I should have swum more.

This was a race that Selena, Lisa, and I all agreed to sign up for. It was going to be our A-race for the year (before I haphazardly decided that I wanted to do a full), and we were so excited for it! The thing I love most about these women is their drive and how they are always motivating me to be my best. I would not have wanted to go into this race any other way.

I drove down to Oceanside Friday morning (I actually forgot that the race was on a Saturday and not on a Sunday, which really threw me off) - Athlete check-in was seamless, and many of the volunteers were from Camp Pendleton. They were all so sweet and encouraging. "Good Luck"s all around!

The swag was great too - Oceanside's official 70.3 shirt was a grey tech shirt, and we were given a coupon to head over to the IM Merch tent to pick up our bags.

Transition and the finish line were about a mile apart, so we had to drop off our bikes at transition the day before. I thought about leaving my gear there, but as no one else was doing that, I said bye to my bike and went to CalTri's team dinner instead. 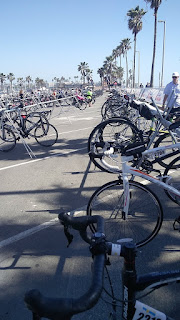 Those who know me well know that I am early to just about everything. EVERYTHING. I hate pushing things to the last minute because then I can't prep! It's also one of the main reasons why I overpack. I always want to have a plan B and plan C in case plan A backfires.

I woke up around 3 am, checked out of my hotel at 4, and walked the .8 miles to transition at 4:30. Transition opened at 4:45, so I had plenty of time to assess the area, set up my stuff, and get my leg and arm marked for the race. 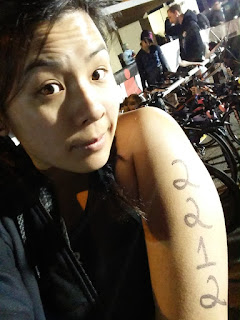 At 6:30, we were pushed out of transition into a holding area, and slowly we filed into a chute to wait for our turn to get into the water. I was freezing. Outside, it was 52 degrees. Luckily, the water was 10 degrees warmer at 62. You could hear the sighs of relief as we all filed in. We swam over to the starting line, and at 7:17, we were off!

The swim was slow for me. I felt comfortable the whole time, and in retrospect I should have tried a little harder. Sighting was easy, but as soon as we turned, the sun was in my eyes. Tinted goggles are the best invention ever. There was a little chop at the turn as well, but for the most part, the water was calm.

As we ran out of the water, I could tell that the swim was a little longer than it should have been (only by a little bit, according to my watch). We had to run up the same chute we were shuttled out of earlier, and back intro transition.

The bike was good but challenging. I've done 2,000ft climbs before, but I don't think I was anticipating going up the side of a mountain at mile 35. I watched as grown men got off their bikes and walked up. As Selena says, "If you can bike it, I won't let you walk it" - so I didn't. My back was aching by the time I hit mile 25. I constantly had to get up off the saddle to stretch. On one of the smaller hills, I cross-chained and my chain fell off. Not good. I freaked out a little, thinking my chain had broken, but it was a quick fix and I managed to get going in less than a minute. 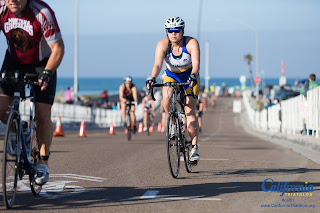 There were a few points that were different about this course - the no pass zones - once on a bike trail and the other on a 25 mph speed limit going downhill. Safety precautions supposedly because of a death in IMCali's first ever race, so completely understood, but some of the athletes were very rude about it and called out remarks about cyclists being too slow, etc. Not cool. The headwinds on the way back made for a slower ride into transition.
With that said: the ride was amazing. We got to go into Camp Pendleton! Marines were on just about every corner, and though many were stoic, others cheered and told us we were doing a great job. It was interesting to get a different look at how a city like that operated, and I loved the idea of riding in a place that most people aren't able to.

Transition from the bike to the run was fine. I was a little slower because I wanted to ensure that I applied enough sunblock. I guess it didn't help, because I'm now peeling - my face, my back - it's great.

The run consisted of 2 roughly-6.5mile loops. The first loop was longer than the second due to construction, which is why the finish line was a mile away from transition. I had a cramp in my left leg miles 1 - 6. It was difficult to even put my leg on the ground. It also turns out that my first mile was incredibly faster than it should have been.

Either way - I'm thankful for the relatively flat run course. There were about 4 medium sized hills, which many walked up. Seeing those hills from far away were kind of demoralizing, but I made it over them! Another interesting point was running back toward the finish line and seeing the masses of people, only to run back out to start your second loop and seeing nothing but runners. I remember the way I felt at mile 11 of my last 70.3 - it was so hard to get to the end. With the run this time, I took it easy: the sun was beating down on us and there was no shade whatsoever.

The last half mile could not have gone any better. One of the things I love to do during my races is read all the signs: "You're only half crazy!" "Beer and Pizza at the end" "Smile if you just laid one" - they're great. Out of the corner of my eye, I saw a sign that said "Gooooo Winja703! Bathroom 1 mile -->" and I thought I was hallucinating. I thought, "Wow! Someone else has my nickname... and my hashtag.. wait a minute" - IT WAS PATRICK!

A sight for sore eyes, really. It's hard to go to a race by yourself without having your support team. My sister - up until this past race - had been my go to: My schlepper of transition bags, my cheer squad - my "Eye of the Tiger" prep-singer. This is the only time I'll say it: Patrick, I'm glad you were there.

Okay, now that the sappiness is out of the way: I FINISHED! I was a lot slower than my first half, which goes to show that training goes a long way - I will definitely be amping it up in preparation for Vineman. 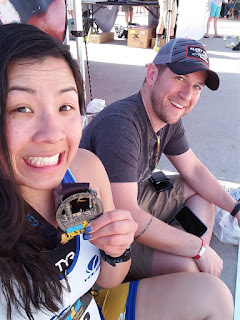 Also, special thanks to Alice and friends for making their way to Oceanside to see me after I finished! 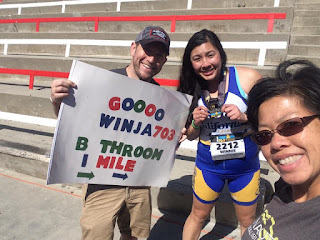 Last and especially not least, I want to express my elation regarding the two other pieces of my Team Shiiicago pie: both Selena and Lisa were finishers as well! 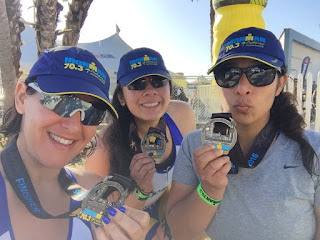 Kudos to these ladies - we are truly a triple threat, and I'm so glad I have them to motivate me and push me the way they always do. So much love for them! 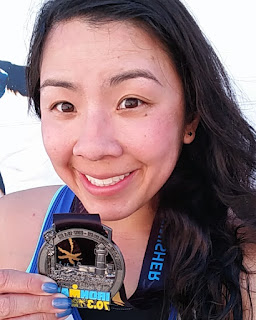 How does one celebrate an amazing feat? Disneyland.

Yes. I drove to Disneyland right after my half. No regrets. 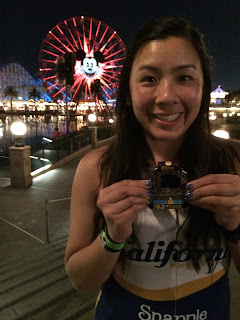 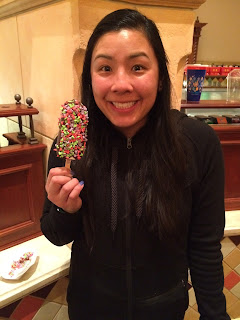