This weekend passed by WAY too fast. I feel like I didn't get enough time to catch my breath and when I did, it was time to go to work again. This weekend was a big one - It marks the last few races I'll do before we head down to Arizona for THE BIG ONE.

I'm sure there will be at least one more post before then, but in the meantime, lots to cover in terms of the two events that I did this weekend!

My heel has been bugging me lately (Plantar Fasciitis works in mysterious ways - as in, it doesn't like to heal the way it should) and I've been hesitant to work myself out too much in fear that I'll hurt myself before the race. Does this count as an injury? It's definitely a developing one.

I got up rather early on Saturday morning (around 3:30) and got to the Santa Fe Dam around 4:30. Since transition wasn't going to be open until 5, Marcos and I spent time in the darkness talking  about his Ironman (IM Maryland) and race prep. I've found that over the course of the last few months, talking to people who have done a full really helps in terms of calming my nerves.

Transition opened and we were allowed to set up wherever we wanted. I chose a rack closer to bike IN because I didn't want to run with my bike whilst tired. It turned out to be very beneficial, as it meant finding my pace for the run while still in transition. :) So many of the Disney Tri Team came to represent, and we were all able to rack together!


The race itself was straightforward: An Oympic distance - one mile swim, 25 mile bike, 6.2 mile run. I was in the third wave and started my swim with women aged 40 and below. The water was murky but warmer than the air was outside, and I couldn't complain because there were no waves in the water. It was a perfect swim at 29:20.

Transition was quick, and I left on the bike a few minutes after. The ride was nice: 3 loops along the San Gabriel Bike path - fast and quick with a little headwind on the ride back each time.

The ride was probably the fastest consistent ride I've been on: I averaged 18.1 mph for the three loops. Probably a good thing that it was flat :)

Got off the bike, and transition this time around was even faster - I was probably only in transition for a minute or so. 6 miles isn't too much, and the run was quick. Sometimes I wish I could run a little faster, but I was consistent and finished without feeling tired at all. Goal achieved.


We had pancakes after (Colette and Emily were on pancake duty and I got to make one of my own), and left soon after to pick up my race packet for RnR LA.

Alice and I took the metro to the LA Convention Center - it was surprisingly easy and we had no issues - though it seemed like EVERYONE was there for a different reason: Stan Lee's Comic Con and League of Legends were taking place at the same place. I'm never opposed to people watching, so I had a great time. 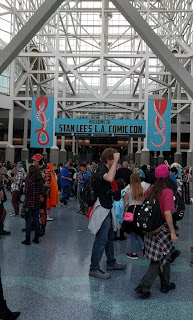 Picked up my packet and headed back. I knocked out early - triathlons take a lot out of you!

Alice was planning on bike-leading the half, so I hitched a ride with her and we got to LA Live by 5:45. The race was set to start at 6:45, so I met up with Patrick and we grazed over a game plan. The funny thing is - for every half marathon we do together, I tell him I want to target a 10:30/mile plan. We never hit 10:30. Like clockwork, I suggested we do a 10:30, and like clockwork, Patrick laughed and agreed, knowing 10:30 was out of the question. 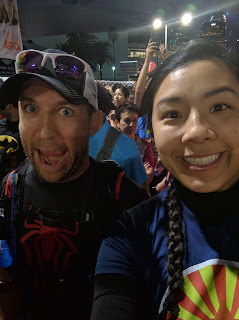 We were in corral 6 (of 22 corrals) and had a rolling start - the waves were so fast that within a minute we were already on the course. The first four miles were very steady - mid 9s - Patrick was trying to stay consistent, but I think whenever I run in races with others, I get super competitive and always want to run ahead of the people I see. Patrick threatened to hold me to a 10:30 pace, but we did really well - He kept it very consistent and I... I was very spastic. I tend to push myself harder on hills (I have a backwards sense of rationalization), so every hill it was a "bye, Patrick" and I would meet him halfway up and keep running with him.

Around mile 8 my heel started acting up. I'd pause and try to stretch it but by mile 11 I was kind of hobbling and putting more weight on my right foot to lay off my left. (At the moment I have a splint on my leg to allow for the scar tissue to form correctly.) We finished strong (Patrick and I have a saying when one of us starts to fall behind), but Patrick told me that we'd hang back and not speed up, and AT THE LAST SECOND speeds up, blows past me! - and finishes ahead of me. Not cool, Patrick!

The half was GOOD. Really good. I felt strong and I didn't feel tired. I felt like I could do so much more, which is saying something considering I did an Olympic the day before. I needed this weekend to prove to myself how prepared I was, and I'm glad I did it. 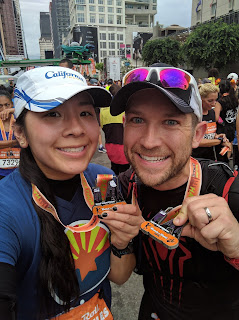 We headed over to the beer garden, where Michelob Ultra was serving up after-race refreshers. 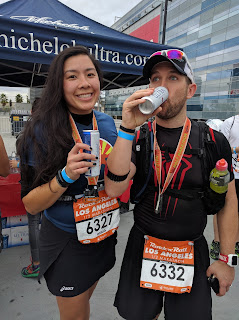 The Mowglis were playing the after-race show, and while I'm a fan, I didn't think I would know as many songs as I knew! 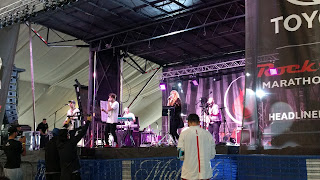 Everyone was still running, so they played to a mostly-empty crowd. I'm gonna call it "intimate" because I literally had the best time dancing by myself. Technically it wasn't dancing because I was seated on the floor with my legs strewn and wiggling the upper half of my body.

Jared saw me from the distance, and his reaction? 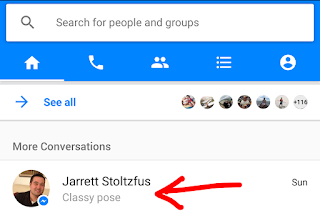 Had to stop dancing to save face. :)