Yesterday, I became a 4-time half ironman. It was the third half-ironman I completed this year, and a big "training day" test before the full in November.

Overall, I did better than I thought I would, but was disappointed with my run and very impressed by my bike.

I took this race more like a weekend workout to see how well prepared I would be for the full. With that said, there was no taper for this race. I woke up bright and early Friday morning, swam with GRA, and rode the river trail with Patrick before I headed out to Arizona.

Guys. The drive from LA to AZ is quiet. Without stops and with some minor traffic, I made it to Tempe in six hours. 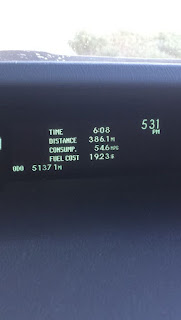 Best part? I averaged nearly 55 miles per gallon. All the way to Arizona with 3 gallons of gas left to spare. (The little things in life make me happy!)

Arizona is dry. I started sneezing as soon as I got to Tempe and couldn't tell if I was sick or just allergic. I think it's more allergies than anything else now that I'm back home, but it's not very ladylike when you're on the bike and snot runs down your face and hits your shoulder during a race.

Saturday morning Patrick and I met up to pick up our packets and sign our lives away.

We sat through an athlete briefing after we dropped our bikes off, and then scouted the course for the full. Guys. We didn't anticipate hills on the course. THERE ARE HILLS ON THE FULL COURSE. It's time to get some hills in for training. It's late. I know. I just wasn't expecting anything outside of a flat course for the full. (Insert sad face here because I was really sad to find this part out).

I spent much of the weekend worrying about whether or not this race was feasible. To top it off, the weather was supposed to be 93 degrees and my wave wasn't set to start until 7:56 am. My emotions were out of control.

Those who know me well know that I worry a lot. As in, I overthink things and replay scenarios in my head way too much. I couldn't sleep, and woke up at 3:30 without my alarm. I was only a mile away from transition, but I hate being late, and even though my wave wasn't set to start until 8.. well, I showed up 4 hours early. 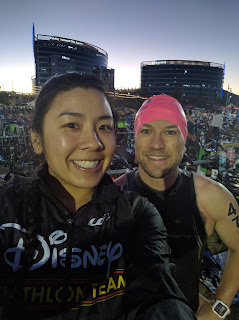 Just kidding - Transition opened up at 5 and everyone had to be out by 6:20, so I had to find something to do for an hour and a half. I watched the swim start, including Patrick's 6:30 (lucky duck) start, and by 7:56, we were in the water and the cannon was going off. By then, the sun had risen and my tinted goggles came into play. With the mentality of taking it slow, the swim was nice and smooth - a few of the girls tried to swim over me, but I was able to get away and managed to get into a rhythm by the time I hit the fourth buoy.

A volunteer pulled me out of the water at the end (it's a staircase with rails) and wetsuit strippers helped me out of my wetsuit.

The bike I was expecting a 4 hour time - turns have been hard for me since my bike accident, and I always unclip and brake when I do, so I figured I'd be about 20 - 30 minutes slower. The turns weren't as hard as I thought they would be. I still unclipped and I still braked, but I took advantage of the straightaways and went into aero whenever possible.

The result? 8 MINUTES FASTER THAN MY FASTEST TIME ON THE BIKE. I averaged 17.2 mph and made up the time I lost on the swim. My sunburnt face and shoulders were a worthy sacrifice.

Two coats of sunblock later, I started the run. It was torture. In my head I was trying to figure out where Patrick was. I figured when I finished my bike, he'd finish his run, but in reality, he was only half way done with his run and probably miserable.

Try starting a half marathon at 12 noon. Insert 92 degree weather. Insert haphazardly sprayed sunblock over already sunburnt skin. Insert already exhausted legs not ready for a run. That was me.

I started to develop plantar fasciitis a few weeks ago and had to get new shoes to try to repair the stabbing pain in my heel. My new Hoka One Ones had never seen a run over 4 miles, but I couldn't risk exacerbating the pain even more, so I broke the golden rule: Nothing new on race day.

My gimpy run started off fine - my first mile clocked in at 9:38, but soon after, my mile time slipped to 10s, 12:30s, and even hit 15+. It was so hot. I was trying not to dehydrate, so I held a cup of ice while I ran, and I walked during the aid stations. Mentally, I was all there. I was so excited to finish. Physically, my body was shutting down on me. The run course was unforgiving and had no shade. My lips were chapped and no amount of water was quenching me.

But, I finished. I kept asking myself if I would be able to handle the full, but I think the conditions were a little different. The heat was a big factor. The new shoes.

I want to say that (for the most part) I am ready, but who knows?

I downed 2 bottles of water as soon as I finished. I headed over to the athlete food tent to get into the shade, and I sat there for 15 minutes without talking to anyone. I needed to cool down.

4 halfs is a big accomplishment in my eyes. We're a month away from the full. Fingers crossed.

Garneau was nice enough to repost my photo on Instagram!

Consider this your #MondayMotivation. Go after what you want. Don't let a not so stellar moment ruin your chances at a great overall result! #LiveYourDream 👏 @_winja on your 4th half-Ironman! ・・・ #Repost @_winja It's 92° and I'M NOW A 4X HALF-IRONMAN, Y'ALL! 💪 worst run of my life, best bike of my life. I'll take what I can get. #IMAZ703 #winja1406 #winja703 #burnttoacrisp #ihateeveryone #Garneau #LiveYourDream
A photo posted by Garneau (@garneausports) on Oct 17, 2016 at 7:28am PDT