In 2011, I watched a documentary that would change my views in life - about eating, the appreciation of food, and the art of gastronomy.

Fast forward 11 years, and I found myself at the door of Sukiyabashi Jiro, herded in despite being 15 minutes early, and glimpsing at the great Jiro himself before pinching my arm for the third time that evening.

Growing up, I had this odd relationship with food - I wouldn't call it an eating disorder, but upon reflection, it probably was. I ate hot cheetos for breakfast in high school, and in college I'd create a little competition with myself to see how many meal swipes I could save by the end of the quarter. Looking back, it was quite embarrassing. I'd be hungry but I wouldn't indulge except for the things I knew I shouldn't have indulged in.

It wasn't until after college that I met and lived with some great people, and they introduced me to fine dining. Not any kind of fine dining - the type where you'd save your pennies for months to enjoy a meal that lasted 3 hours - the kind of meal that made you "full but not full". Over the years, my palette has changed, and my love for food has grown significantly. I haven't watched Jiro Dreams of Sushi in almost a decade, but I still remember how I felt the first time I did.

When I found out I was going to Tokyo a few weeks back, I started to do some prep (work on the visa, download offline maps) and saw on google maps that I had a few locations starred. I "star" anything that might interest me so that when people ask for suggestions I can just pull my maps up and tell them! 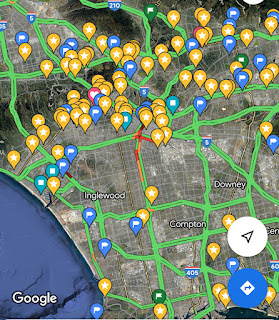 For reference, this is my LA map. 🤣 Lots of stars!

I figured - why not try to get a reservation to Jiro? The wait list is probably a few years long but if I don't try, I'll never know. I went on the website and it clearly stated DON'T CALL US.

So I reached out to the concierge at my hotel and asked if they could do it instead. The response I got back was a little depressing - they told me that Japan was observing a holiday called Obon and that many places would be closed. We have a similar holiday in Chinese culture so I understood how big of a holiday it would be (many of the trains were essentially empty during those days!) and I gave a 2 week range to the concierge to see if they could accommodate any other day. If the range was outside of my initial stay, I'd try to change my flight to make sure I could go.

After a few back and forth emails, they did it! I got a nice little letter stating that my reservation was confirmed, with a few caveats:

---
I think my face melted off my body. A dream come true!
I started to do some research (i.e., what is a smart casual dress code? how long will it take me to get there?) and found out that Jiro no longer served at the restaurant. Understandable - he's 96 and WHAT?! they have a second location?!
I started to get kind of sad but came to terms with it because I was going for the restaurant, not the chef. I was still excited to see Jiro's son, who had since taken over the restaurant.

The day of the dinner, I tried on multiple outfits. WHAT IS SMART CASUAL. The concierge said "no short skirts", and "a collar is preferred for men". He even suggested I wear pants. But since all I brought to tokyo were dresses, they were going to have to deal.

I left at 6 to get there for my 7pm reservation, and laughed when I got to the station 40 minutes early. Google did me dirty and did NOT take me the right way, so it wasn't until I saw Jewelpie's blog post with directions that I finally felt like I was going the right way. Her directions didn't get me there so here are my tips:

If you get a reservation:

2. Navigate yourself to the Ginza Station, exit toward C6 but DO NOT go all the way out to the street. There are double doors before you walk up the last staircase out onto the street - go through them and Jiro will be on your right side! I walked up and down those C6 exit stairs 4 times before I tried the door. Don't be me! 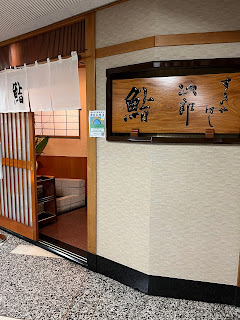 No photos inside so please enjoy my brain dump:

---
20 Course Omakase:
I did some research before writing this so I could give the best descriptions. The descriptions that were on the menu really confused me (what is bonito?). I highly recommend Jiro's books - Jiro Philosophy and Jiro Gastronomy - for more in depth descriptions of the food served. 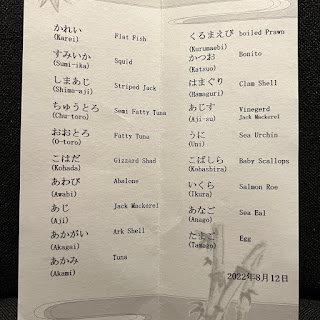 some things to note:
After the meal was done, they moved us over to a second set of tables to enjoy fresh melon while the employees cleaned up. The restaurant became a little livelier as the 6 of us (yes, 6 - not even the full 8!) moved to little tables that faced each other.
Since I was a party of one, I enjoyed the little corner table. I had the best view in the restaurant - I faced Jiro as he sat behind the curtain watching his team clean up the restaurant.
When everyone was done with their melon, each table was excused one at a time to pay and leave. I was the last one in and the last one out, and Jiro waited outside while I finished paying so I could take a picture with him. I teared up as I told him I waited so long to meet him. 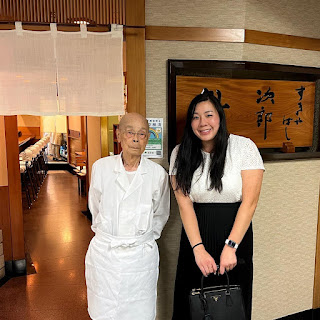 I still think about this night. One of the best experiences of my life and truly one of a kind. 1000/10, I'd eat here again.