One thing I want to get out of the way first. Last year, Winnie's and my run times were only one second apart. I've tortured her mercilessly about it all year. She'd say we had the same time and I'd make a point to say "well.... I ran a second faster." Well this year, her run time beat mine handily. By several minutes in fact. So this year the trophy goes to her.

Now, back to our regularly scheduled program: Round 2 in Patrick v. Vineman. This battle was just as bloody (metaphorically) as the first.

Lazlo Hollyfeld: How'd you do?
Chris Knight: How'd I do? I passed! But I failed! Yeah!
Lazlo: Well, then I'm happy and sad for you. 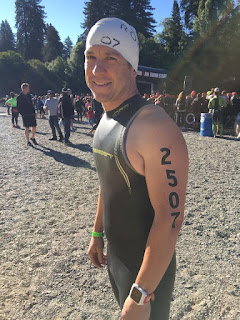 I expected the swim to take longer than last year. I've been neglecting my swimming lately for a host of weak reasons: work, too tired, wanted to focus on other legs. But I dove in and gave it a go, trying to swim efficiently and save energy for the rest of the race.

A nine second difference? Not bad, not bad at all. 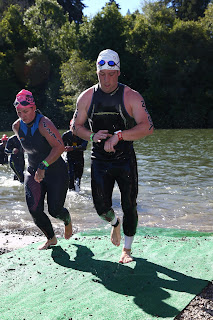 I expected the bike to take longer too. I've also been neglecting my bike in favor of working on my run. Nonetheless, the bike felt ok. My legs were tired from exertion, but not cramping up. I felt pretty good coming off the bike.

A two second difference? Two?! Well, I'm nothing if not consistent.

An aside: At one point I was cycling up a hill and got stuck behind a car, which was stuck behind another racer who was in the middle of the lane of this two lane road. Ride to the right, people! The car moved a little left so I started coming up alongside it on the right when the rider up front dodged a camelbak bottle in the road. The driver of the car didn't see it and drove right over it as I passed, exploding the bottle's contents - which by its stickiness I can only assume was Gatorade - all over me. Not the shower nor the hydration I was craving at the time. 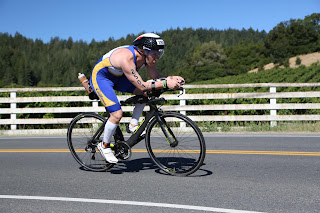 Special entry here as a warning to others: Body Glide will liquify in the sun. I opened mine to do a last minute application and instead dumped the melted BG all over everything, including inside my aero helmet. So I have to scrape that out now (it's since solidified. Fun).

I was going to rock this. I hired a run coach and totally changed my run form. I've been doing trail running training. I was not only expecting to cut time off my run, I was going to cut one, maybe even two minutes off my run pace. Last year I ran a 2:25:14; that's an 11:30 mile. Well that's an 11:23 run/walk mile. I KNOW I can do a 9:30 mile for a half-marathon and it wouldn't even be that tough.

I drove the course the night before and dismissed my stretch. It was just too hilly to do a sub 2:00, even fresh. But I could still go for knocking a minute, maaayyybe two off my mile pace. So how'd it go?

Not even a full four minutes faster. An 11:05 minute mile. But that's not surprising how I felt coming out of transition 2. I don't know what it was, but about a mile into the run I just lost all motivation. My legs were heavy, I had a stitch in my side, and my quads were cramping up. I was miserable. So I allowed myself to walk. At the time I thought "I'll just walk for a couple seconds and then run the rest of the race." And that was probably my undoing. I allowed myself to fail and for the rest of the 13.1 miles, I horse-traded with myself. "Run to that cone and then I'll let you walk up the hill to the next one." Over and over. Just like last year. It got to some points where my Garmin thought I had stopped moving altogether and auto-paused. Towards the end of the run I had to rely on my clock to guesstimate what time I would finish with.

Coming into the end, I was checking my watch and saw it was approaching 2:34PM very quickly. If I beat that, I would have a sub 6:00. I saw Alice closing in on the finish and although I wanted to run in with her, I knew I needed to sprint instead to make the cut off. Ignoring the cramps in my quads, the rippling cramps (that's a new one!) in my calves, I sprinted towards the end. "You can't pass me!" she said... as I passed her. "Sorry!" I called back, not bothering to see if she was following me in. 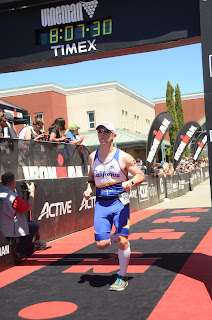 Luckily I finished with a 5:58:31. I beat my goal for this year and my reach for last year. But to be honest, I couldn't enjoy the "victory." I don't know what it is - whether I'm just not cut out for half or greater distances or there's something unique about Vineman's course that breaks me mentally, but I just didn't enjoy the race. That's what I meant with the movie quote at the beginning. I passed, but I failed; and that's why I'm done with it. It's a beautiful course and Latisha's family is there so we can visit, but I'm done trying to beat the course. It's beaten me. 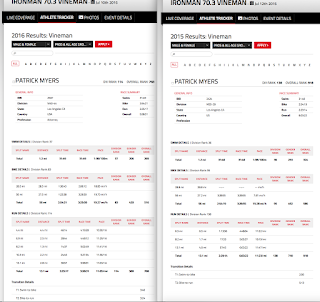