Well. It's been 2 days, and I'm NOT sore! For the first time, I feel like my training has finally paid off.

One year ago TODAY, I did my first half-ironman. Sunday marked the third half-ironman I've done in the span of a year, and in short, I'm VERY proud of myself. It's hard to really acknowledge how much time and effort goes into training because you never feel like it's enough, but when you cross the finish line, a huge weight lifts off your shoulders, and you feel good. Really good.

This was my second time doing Vineman - it's a hilly course that starts in Guerneville and ends in Windsor. 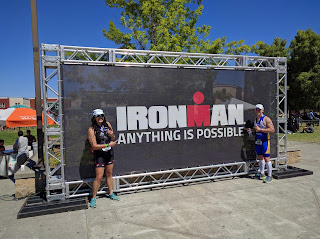 Things were a little different this year in that we were told to drop off our bikes and our run gear the day before - with T2 17 miles away from T1, we had to plan accordingly to get everything dropped off by the 4pm cutoff time at both locations and check in for the race itself.

I did, however, get to cram time in to meet Nanette from Women for Tri, a fellow ambassador who did a great job holding down the fort and meeting some of the women who represented 39% of the race population at Vineman 70.3! The goal is to empower more women to do triathlons, so you'll see a lot more Women for Tri plugs from me as the year progresses. 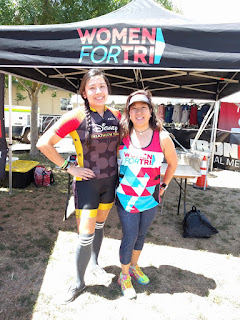 (Disclaimer: Two weeks ago, Bryant and I rode to San Diego from LA, and I pulled a muscle in my right leg. It had been bugging me since then, so I had fears that I wasn't going to finish and that I was probably going to be in pain.)

We got to transition around 5 in the morning - everything was dark and calm, which made for a very peaceful transition set up. 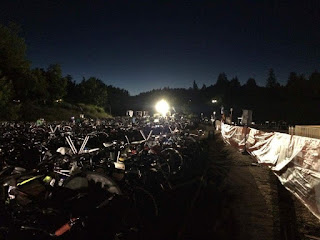 Another thing new thing about the race this year was that everyone had to be out of transition by 6:15 am. On top of that, we were no longer allowed to pass our stuff off to our support crew - it would be considered "outside assistance", and we were told that we would be blue-carded and disqualified from the race if we did.

We all went back to our transition areas to try and figure out what we would do without the help of our friends. Half of my stuff went back into my transition bag and was handed to Alice's brother before the race. All of the items that I wanted after the race was over was placed into my morning bag, which included my phone. Before I gave it up, however, we pulled most of the DTT team together and took a picture! 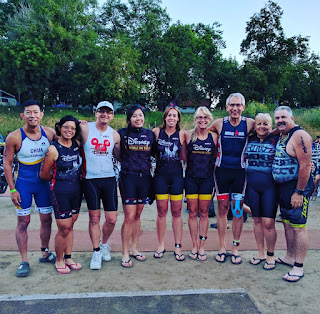 You'll notice that the #WheresPatrick hashtag comes into play here. He left his phone on silent and missed his opportunity! We'll photoshop him in later.

The pros took off exactly at 6:25 - both Crowie and Andy Potts were racing, so it was great watching them come out of the water and pulling their bikes out of transition. My wave (obviously less important) took off at 7:22am. The water was a cool 71 degrees compared to the air temperature of 58. Half of the swim course is meant to be swum against the current, so I swam on the outside of the river to get a little less of the brunt, and closer to the markers on the way back to get an extra push from the natural flow of the river. Shallow points in the river meant athletes getting up out of the water to walk the swim, which astounds me every time. I'm against it, but I do know that Patrick walks it every year. Maybe he'll elaborate a little more on it in his race report.

Despite feeling good after the swim, it looks like my time was a few minutes slower than last year - 3 minutes slower. I'll blame it on the current.

Transition was much more organized this year - carpeted for all of the athletes so that they wouldn't struggle with the muddy ground as they pulled their wetsuits off. Since there was no handoff, I took off on my bike without worrying about looking for someone to pass my wetsuit off to - I jammed it into my bike bag and ran up the little hill before mounting my bike (another change they made to the race this year - probably because so many people fell off their bikes last year trying to get up the hill).

The bike course seemed a lot shorter than it did the last time I rode it. Alice said she practiced a lot more on hills - I chose to do the distance. This year alone, I did 3 centuries as part of my training for the full, so the normally daunting 56 miles only seemed like a 30-mile ride, which was a nice way of looking at it. Mile 44 is always the kicker: Chalk Hill. My back was on fire by the time I hit mile 30, so I found myself getting up out of the saddle quite a bit. I think I'm due for another bike fit. This back pain isn't getting any better, so I'll need to lessen the pain everywhere else if possible.

Lots of rolling hills, lots of people that I passed with flat tires, lots of unpaved roads, more cars, more SAG support, and less crowd-cheering. Beautiful sights, though. Probably 50+ vineyards that we rode past.

Bike time was very similar to last year, but this year! This year we got to ride a little further into the transition area before dismounting, which was nice. Last year we had to run a quarter of a mile in our bike shoes. Not cool.

The run was hard. You know that feeling when you're finished with a workout, you're exhausted, want to go home, and then you realize that it's 7 in the morning and you and have to go to work right after? That's how I felt when it came time for the run. I was putting my shoes on in transition and asked myself why the run was 13 miles and not 1. Or none. None would have been nice.

I put on my hat, sprayed some more sun block on, and rolled out of T2. Rolling hills. So many rolling hills. The first few miles are shady, but then all the trees disappear and you're running along an airport property with NO TREES. I was a little smarter this year - I ran with a cup of ice. At every aid station, I asked for more ice, and I made sure that I was always hydrated. I actually think I may have over-hydrated, but when you're running in the heat, less is definitely not more.

My overall run time dropped by about 7 minutes, which made up for a lot of the time I had lost in the swim and the transitions!

I will say I had no energy left by the time I hit mile 12. I wanted to sing a song in my head but couldn't think of anything, so I counted. From 1 to 100, and then back down again. I saw the finish line as I turned into Windsor High School, but I continued to jog it in. I had nothing left. I'm hoping that by the time I hit my next half (October), it will be cake - the full is in November!

The most important part is that I finished. I've been called a sandbagger before because I'm always telling people that I don't think I'll be able to finish races. I think my expectations are so much higher than they should be, so I verbally communicate a lower expectation so that in the event that I actually don't finish I'm not as depressed.

I checked my time and I was a whole 5 minutes faster than my time from last year! I know there is room for improvement in the swim (I should have swum a lot more) and the bike (I should have worked on a lot more hills) - the run was good but I know that with more practice the time will go down steadily. I'm looking forward to my next race! 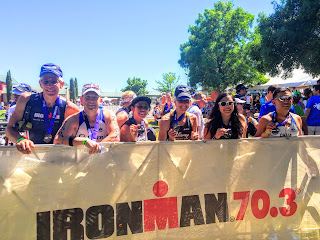 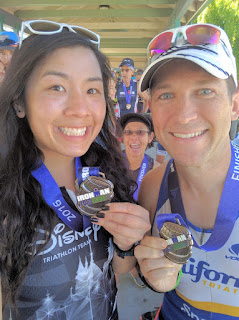 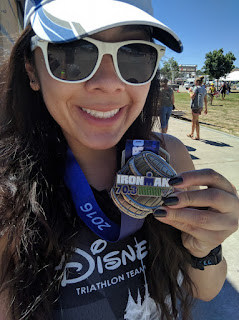 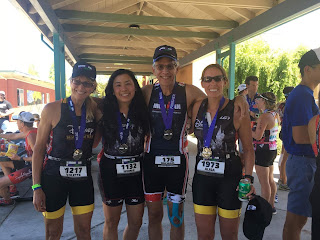