Patrick and I were two hours into our three-hour ride and I was feeling so great! We were averaging 18mph - probably the fastest I've ever consistently been on the bike (I'm not fast), taking turns pulling: the way back on the bike path we were taking is usually windy and slightly uphill, so drafting (while illegal in races) helps us conserve energy for long rides, and taking turns pulling ensures that each cyclist gets enough front time to get tired.

So there we are, mile 31. We traded off at mile 15 and mile 30 so I was still fresh from forcing Patrick to lead. In retrospect, I shouldn't have offered to pull again. The road split into two, and without thinking, I naturally veered toward the left, only to realize a split second after that that wasn't where I wanted to go. Where I turned, the road ended and I probably would have eaten shit going 18mph into dirt with rocks. Instead, I got to eat shit in concrete about 6 feet before the dirt started. I braked harder than I should have, and (according to Patrick) my back tired fishtailed as I flew over my handlebars.

I don't know if I landed on my bike or if my bike landed on me. I laid stunned on the floor and in my head I could feel the blood rushing toward my right arm. My right leg was in pain. Two other cyclists stopped to ask if we were OK. I laid motionless on the floor, with my right hand in the air - too afraid to move anything in fear that I was going to crack something as a reaction. My head was pounding from the fall - I probably hit it on the way down or after, because I remember looking up and seeing unfamiliar faces.

This very nice man offered to take my sunglasses off (not sure why, but I wish he didn't because he didn't return them!), and he and Patrick insisted that I not move until I was ready.  When the shock started to wear off, the two of them helped me up. A lady who also stopped scared the shit out of me because she said that if I tried to get up on my own my leg was going to shatter. (And I'M the dramatic one?!) I'm very gullible, so I believed her.

I stood, the nice people left (with my sunglasses 😭), and Selena showed up. I was bleeding from my right and left elbows and my right shin. The first thing Selena does? Snapchat me in pain. I will say, however, that I have great friends. The people who can help you laugh at yourself are the ones you should keep for life. They put your mind off the things that concern you and make the injuries hurt a little less. 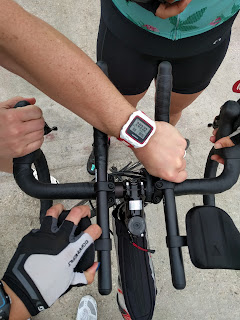 Patrick left immediately after - the ride back was over an hour and my bike was not rideable. He was going to come back to pick me up and bring me back to my car. Selena stayed behind and we hobbled over to a nearby park to wait for him. Jesus (what a sweetheart, no joke) offered to pick me up, but I figured I was already inconveniencing enough people, so I said no.

Patrick and I laughed about this later, but Murphy's Law is real, y'all. Anything that can go wrong will go wrong. Patrick got a flat tire on his ride back. Minor setback, but I'll take minor over major any day.

Selena and I befriended a family while we were in the park. They were setting up for a birthday party in the shade we happened to be sitting in. Guys. I can't believe how nice some people in this world are. The two ladies who were there got back into their car when they saw how broken I was, drove home, got a first aid kit, and helped me bandage myself up (and watched me cry a little because of the alcohol antiseptic pads).

I'm home, I'm fine, and I was still able to enjoy my weekend. I'm sad because I broke two spokes, bent my front and back wheels, bent my derailleur hanger, nicked my shifters, bent my handlebars beyond repair, and bruised my arms, my legs, and my ego. I'm sitting at Newbury Park Bike Shop watching Ryan fix my bike and I'm being told that I'm lucky that it was the bike and not me. 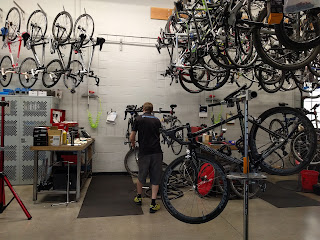