Winnie's Thoughts. Oh, and a recap of the Nautica Malibu Triathlon

This is a huge post because I have a lot on my mind. Good luck! This post is very emotional and very personal, so please keep that in mind as you digest.


Three years ago (around this time of the year) was my last day at 20th Century Fox. At noon, I checked out, went to grab some Jamba Juice, and prepped myself for a Fall Out Boy (don't judge me, Patrick Stump has a great singing voice!) concert with my best friend Jaime. We had a great time, and on the way back, we got into a car accident. 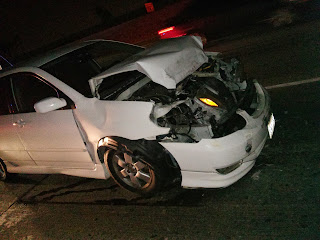 Over the next few days, I had to figure out my shit. I was technically unemployed - bridged between Fox and my new employer Disney - but uncertain whether I was covered by both or no one at all. I bought my first car in a matter of hours (her name is Harper and she celebrates her birthday this week!) and started my new job a few hours after that. It was a whirlwind-ish type of weekend.

Despite all the new things, I fell into a depression. It's hard to balance happiness with sadness when sadness holds more weight. A happy event can be colored another way with a quick turn of events. Jeff and I parted ways after 6 years, and I tried to find my way in a new role at Disney, only to find that I had a void I needed to fill.

Those who know me well know how I found triathlon: my friend Samii put the bug in my ear 3 years ago when she shared her successes of the Nautica Malibu Triathlon. She had just signed up for a half ironman and encouraged me to sign up for a triathlon given my prior running experience.

On May 1st, 2014, DCP had a Star Wars Day celebration (you know, because of May the Fourth) in the courtyard that housed various vendors (and ice cream. and R2D2.) Chelsie, Donyelle, and I were waiting in line (probably for ice cream or R2D2) and someone came up to us to ask us about doing a relay triathlon: each of us could take a leg and all three of us would get medals. Awesome, right? 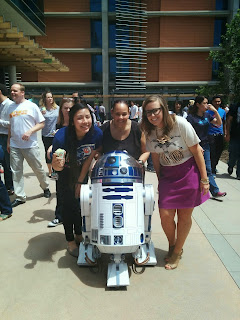 As the girls debated which leg they wanted to take, I wandered over to the MESP booth (They're the race organizers) and asked a few more questions. I guess I heard everything I needed, because I walked away signing up for the WHOLE race myself, sans relay partners. Bikes scared me (they still do!), my swimming experience was limited (not floaties limited, but pretty close), and my running? Well, that one I had down.

The part that fascinated me the most was the charity aspect - each athlete had to set up a fundraising page and raise at least $250 in order to be a part of Team Disney. Every fundraising dollar would go to the Children's Hospital of Los Angeles.

The bravest kids I know are the ones who fight the internal battles they have no control over. They remind me each and every day that my health and happiness are things I am lucky enough to have.

With that said, my first "tri season" was very short. I didn't get my bike until June and didn't start swimming until July. I fell countless times and couldn't figure out how to brake confidently. By the time September rolled around, I had my fingers crossed that I'd make it across the finish line. 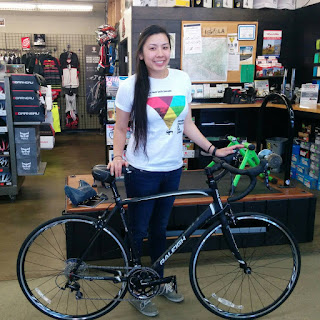 But I did! My first triathlon was the best thing I could have done for myself. Working out pulled me out of my depression, it made me feel better about myself, and it gave me a place to direct my energy. I fell in love immediately. 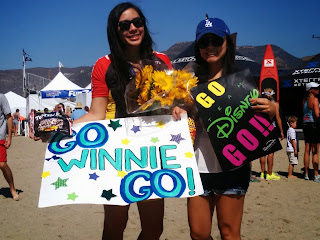 Two years later, I have grown infinitely. I was involved in another car accident (my poor body), moved to Pasadena, watched Wicked a few more times, went to Club 33, started an amazing instagram account with Chelsie (Follow StyledByMarvel!), met Paul Rudd, did my first solo-cation in Hawaii, was DTT's Triathlete of the year in 2015, had my first bike crash, and met a great guy (not Paul Rudd, but he'll do).

The 40-pound-heavier version of me would be proud. 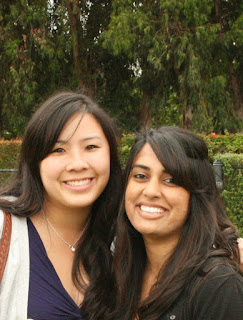 In my last post, I went over my bike crash. I was stung by a wasp on my first ride back. September was not lookin' so hot.

But as we all know, one can't appreciate the good unless they've experienced the bad.

Which leads me to the 2016 Nautica Malibu Triathlon!

I'm very, very lucky to have so many people in my life who support this love that I have for triathlons and racing for a cause. I was hovering on the overall fundraising page as the 4th highest fundraiser for the the Nautica Malibu Triathlon, but in the last few days before the event, I was ousted. All for a good cause, so I'm not too hurt! I beat my goal and then some, so there's that.

The best part of the tri as a whole? I got to race on a team with Disney CEO Bob Iger and President of Disney International Andy Bird!

Initially I was slated to do the full triathlon, but at our Pre-Race dinner on the 16th, Robert pulled me up to thank me as the highest Team Disney Fund-raiser. He had a cute little box for me and asked me to open it in front of everyone. I pulled the beautiful green ribbon off, and in the box was a green wristband. My first thought was that I had gotten another brunch wristband - which would have been a nice gesture! - But I think that would have led to my thoughts of figuring out who to give it out to and... rambling, sorry. This whole post is one long ramble.

So the green wristband turns out to be... a celebrity wristband! What a great opportunity - to be able to race with your idol. It's the best of both worlds but all in one place! Andrew caught my reaction on camera and I think my heart may have exploded in my chest. 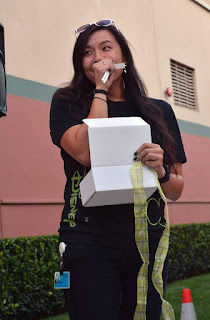 Sunday rolls around and Alice, Jesus, and I pile into Alice's car (now that I don't have to bike anymore!) with the gigantic blank check that we'd be using to present to CHLA. It's dark and early in the morning and I find myself yawning because I haven't had enough sleep.

We park (in a great parking spot, no less!) and head over to transition, where we part ways. I set up my transition area and scope the scene to see who we're up against: Team Zac Efron, Scott Eastwood, Team Switched at Birth, and various News stations. I'm impressed by the sheer amount of people who have shown up to raise money for such a great cause. 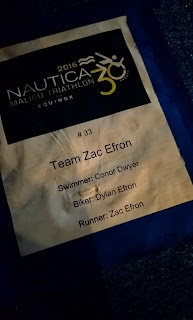 I check in, and shortly after, a volunteer grabs me to introduce me to Bob. Now - this is actually not the first time I've met Bob. I actually met him last year at the same triathlon. But to be introduced to him? Really. Big. Deal.

I squealed. I full-on squealed. In retrospect, probably not professional or a great idea, but I was so excited! It was like that one time I met Andrew McMahon and couldn't muster up the courage to say anything. It was great.

Bob welcomed me with a hug, congratulated me on fundraising so much, and made small talk - he asked me how long I had been with the company, but when I mentioned that I worked at Marvel, he looked at me and said, "I know." - Guys. My eyes are small, but they got really big in that moment. BOB KNEW WHERE I WORKED AND WHAT I DID.

He got his bike checked, and I was introduced to Andy Bird, who is probably one of my favourite executives at the company. He was so sweet and accommodating and was so fun to be around! The three of us talked about anticipated times, how we were planning on "passing the baton", and then we parted ways.

Alfie, Karla, and Jack showed up, and we got the pre-race jitters out of the way. Lots of stretching, and more introductions. And pictures. Lots of pictures. 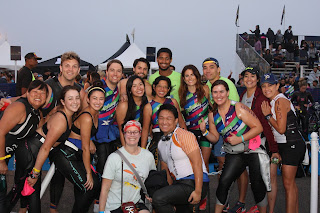 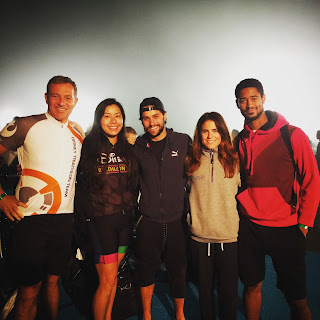 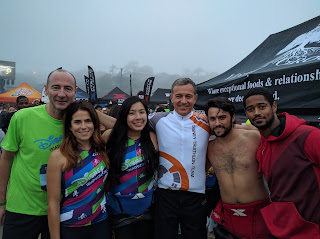 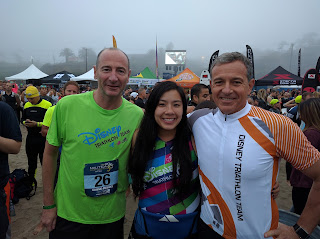 The race itself was amazing. Jack and I were lucky enough (or unlucky?) to start behind Olympian Conor Dwyer. I'm going to go ahead and say that I am not ashamed to admit I came in behind the two of them. Jack is a talented swimmer, as shown by his appearances at our practices in the pool through the season. And Conor... Conor is an Olympian. I'm good.

We were ushered into an area for the awards ceremony, where we collected a second medal for coming in at 5th place out of the 9 celebrity teams. Bob and Robert presented a check for $280,000 to the Children's Hospital of Los Angeles - the biggest donation that we've made to date! 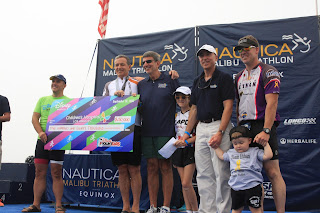 I have said it many times before, but I can never say it enough - I'm a very lucky person. Despite all of the bad things that happen, the good really really outweighs it. The opportunities I get, the people that I meet, the love that I'm given - I don't take any of that for granted. I am truly blessed. 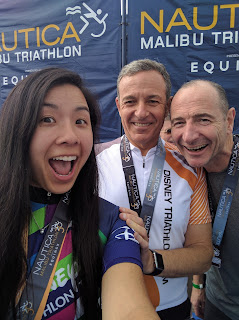 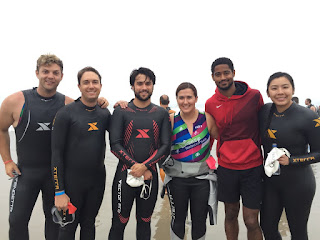 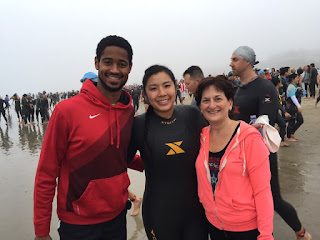 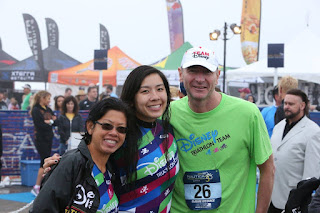 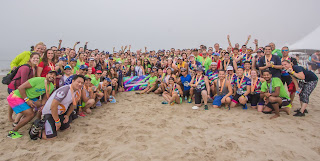 Thanks to Christopher Wang, Diane Hong, Andrew Arcilla, and Alice Chung for the pictures (in addition to the ones I took on my own, of course.)