Last year after our first half-ironman, Patrick and I had the crazy idea to sign up for an ironman. At the time, it was a joke, but the more we talked about it, the more it became a reality. I mean, who doesn't want to swim 2.4 miles, bike 112, and then run 26.2  just to be called an IRONMAN?

We're crazy. We know. November 13th rolled around, and we set it in stone. 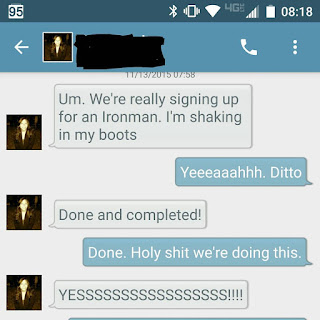 So now we're on this journey. We don't know where we're headed but it's definitely toward the goal of learning how to iron. What are we ironing anyway? =P