Last month, a few of us thought it would be a good idea to do the Palm Springs Century: a 100-mile bike ride with scenic views and thousands of cyclists from all over the country. New Balance offered a "Brick" to those that did a bike ride on Saturday and one of their sponsored runs on Sunday. Sweet deal. 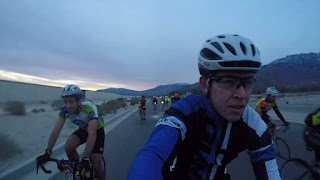 The ride itself wasn't too challenging, but it was long and mentally draining. Kevin, Abel, and I managed to stick in some sort of close distance, so we met up at every rest stop before continuing. 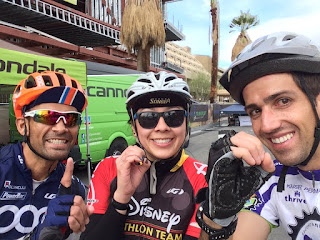 Lisa, Bryant, and Jarrett also finished the 100 miles! We dipped our feet into the hot tub before planning out the next day's events. 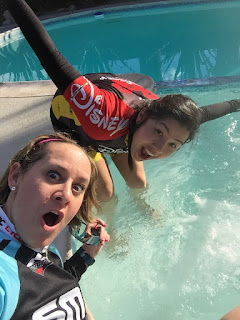 I left a little earlier than everyone else on Sunday morning because I was stupid brave enough to sign up for the half-marathon. Abel, Jarrett, Lisa (and Mia, that cutie pie!) all signed up for the 5k and were running it a little later. 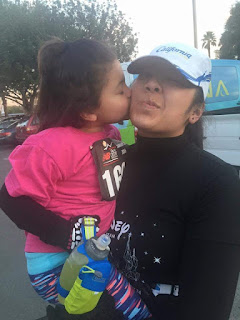 I swear, this kid makes my heart melt.

Guys. If you don't train for a half marathon, DON'T RUN IT. I've been running on and off for the last 15 years - to me, a half marathon is challenging, but considered a long run....

I trudged along. Literally - my hat flew off because it was windy and I considered leaving it because I was going so slow and didn't want to lose any more time. I knew it would take more effort to run back for it, bend down, grab it, and try to regain that momentum that I had lost. Bye, hat.

But then! This nice gentleman stooped down, picked it up, jogged a little faster, and returned my hat to me! I was both grateful and spiteful because he made it look so easy. Then he continued to breeze by me. I'm sure he finished his half significantly faster than I did. I'm squinting my eyes at him right now. -__-. Thanks nonetheless! =P

The good news is that I finished! Lisa and Mia were so great and waited for me! 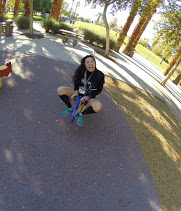 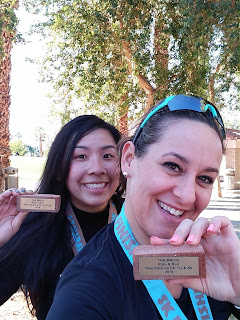 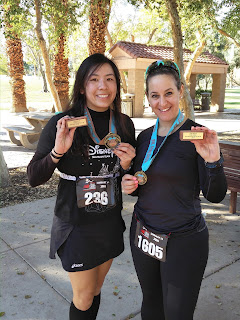 Obviously we celebrated with our bricks. That second picture of me and Lisa? We were both on one of those spring-horse things. You know, the one I'm on in the first picture. But the two of us. We stopped laughing long enough to snap a picture of our bricks.