Normally, I hinge my workouts on how good I feel. Sometimes a 4 mile workout can turn into 11 miles if I feel up for it. Other times, a 6 mile workout turns into 2 because I just... can't.

Two weeks ago, I signed up for the LA marathon. I don't know what compelled me to - I think it was part FOMO and part... just not having anything planned for Valentine's Day. Either way, everyone who knows me knows that I am impulsive, and that if I put my mind to something, it happens. So with that said...

Last Sunday, I did the LA Marathon. Alice and I woke up at the crack of dawn. We dressed in anticipation for warm weather because the weather predicted it, but the morning was bone-chilling cold for this SoCal girl. We drove to Santa Monica to drop off the car, then shuttled back over to the starting line. 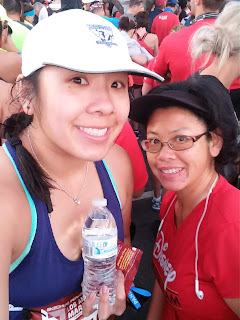 25,000 people crammed themselves into Dodger Stadium, and around 7am, we were off! 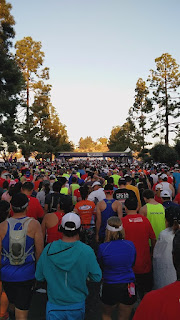 Lesson #1: Find a corral. It appears that if you don't get into a corral, you're stuck with the masses. And the masses? They are people of all different paces who don't mind if their first mile is 14 minutes or 30. I weaved in hopes of getting away from the glob of people, but I think that probably tired me out more. Nonetheless, my first 5 miles were solid at sub-10 each mile. I felt great!

Lesson #2: Hydrate. I didn't think I needed water at every station, but in retrospect, I probably should have taken in a little more every time I did stop. I don't usually drink water during my 13-mile runs, so stopping for water meant actually reminding myself that water was necessary.

Lesson #3: Sunblock. Seriously, the sun does damage. I have a racerback tan that will probably be on my back for the next 6 months. I applied sunblock before we started, but prolonged exposure and fatigue (and probably laziness and eagerness to finish) meant that I didn't reapply and I ended up burning anyway.

I'm sure there are more lessons, but this post is getting too long. All in all, the marathon was great. Despite a lack of training, I did better than I thought I would. I didn't hit a wall at mile 18 - running through DTLA was gorgeous. Hollywood was searing hot, WeHo was the best in terms of cheer sections, Century City brought back memories of when I used to work at FOX, and Santa Monica - Santa Monica was a huge sigh of relief.

I hit that wall at mile 22. I felt like I had run enough, and I felt like no amount of water would hydrate me. I was irritated, my thighs were tight, and my right arm had fallen asleep (does that happen to anyone else?) - I just wanted to be done.

But then! Out of the corner of my eye, I saw the DTLA Running Group. Cutie pie Abel Bourbois rubbed Tiger Balm on my thighs, blew me a kiss, and I was on my way after a few of the other peeps at the tent gave me a pep talk and a handful of ice. 4 more miles to freedom.

A miraculous thing happens when you run the same marathon course twice: you think about the way you feel at certain points on the course. As I ran the last stretch to finish line, I remembered how I felt the year prior - so relieved to be done and so proud of myself for attempting a feat even my doctor said I wouldn't be able to handle.

As you know by now, I finished!


• | 02.14.2016 | • A year ago, I was still in physical therapy with back pain that made me cry myself to sleep at night. It's amazing how time can change a situation. Since then, I've done 7 triathlons, 3 half marathons, 2 swim meets, a half-ironman, a century, and today!!!! Today I completed my second marathon in less than a year. I think about the things I put my body through, and still I find myself astounded by what it's able to handle. #LAMarathon, you were perfect. #werunla #running #winja1406
A photo posted by winja. (@_winja) on Feb 14, 2016 at 3:37pm PST

In 2005, it took me over 8 hours to do my first marathon. I sprained my ankle at mile 5 and was determined to finish, so I walked 21 miles until I did. Last year, in 2015, I did the marathon despite Doctor's orders not to. It took me a little over 6 hours to finish. This year, I didn't train, but my body was able to keep up and I finished (unofficially) in 4:41:25. Alice says I'm doing a sub-4 next year. Keep dreaming, Alice =P

Stephane's only challenge to me was to finish before noon, and with a finish time of 11:45 am, I'm still smiling ear to ear. To many more marathons!